Life is full of bumps in the road. Mine, recently though came in the form of a bump in my eye. What started as the irritating feeling of a speck of dust, soon became the constant annoyance of what felt like a blackfly stuck in my eye. I noticed it years ago and watched as it continued to dine on the sunshine and wind that us guides tend to find ourselves immersed in daily. I affectionately started to call it Fred. In the beginning, Fred came and went without much consistency. One day red and irritated, giving me the, “rough night before” sort of look, and the next day unnoticeable. As time went on though, Fred started to grow and become highly irritable. He required more attention. Daily doses of eye drops and eventually not just any eye drops but only the one shot, sterile, non preservative, expensive kind. He hated driving in the dark or long drives, computer time, getting up early and staying awake for long periods of time. Sometimes the only way to quiet him down was just to keep my eye shut, which was less then convenient most of the time! 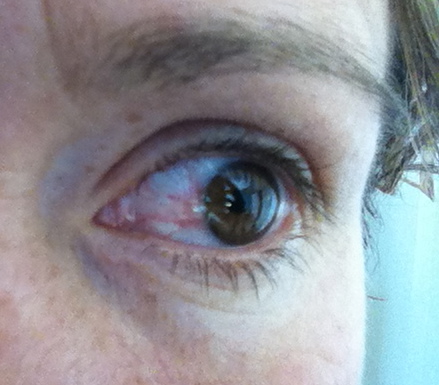 I noticed Fred had a lot of cousins in the eyes of many of my guide friends. Most of us walk around with blood shot eyes from dealing with the elements all day, and as the white in our eyes (scelera) continually get hammered, they eventually build up extra tissue. Pinguecula. Its only when this build up of tissue starts to invade the cornea, that you have invited Fred in for good. Once Fred is there, he won’t leave. No matter what woo woo foods you eat, or spirits you pray to.

Here is a little guide to my experience with Pterygium surgery, and the outcome. I would have liked to have known some of this in making my decisions so I write it in hopes that it helps some of you out there, or at the least, reinforces putting sunglasses on your kids and yourselves!

I visited a bunch of Optometrists. At first they all said it is normal, and would be cosmetic to remove. This would mean that health care wouldn’t cover it and it would cost 5 grand. I was given steroid prescription drops. They helped, but in the long run are not good for your eye to use too often. I was also told that surgery wasn’t recommended as it could come back and as guides being in the elements all the time, the chances of reoccurrence was great.

Finally, it was bugging me too much. I asked my family doctor to advise me to an eye specialist for another opinion. Eventually I saw him, and he agreed that the size and height of Fred was enough to see another specialist. I then saw a surgeon in Calgary. After a 2 hour wait in what felt like a Stevie Wonder convention in a city in India. I had some tests done and was deemed a suitable candidate for surgery. Woohoo! I scheduled it for early spring when work would be over and I would have time to feel sorry for myself.

Lesson 1) DO NOT google Pterygium eye surgerys. You tube is an evil place to learn about this and most people only write about their bad experiences! It almost had me bailing minutes before the surgery

Lesson 2) Expect to be the youngest in the surgery room. Cataract surgery is like getting your toenails clipped these days and that is the majority of the patients.

Lesson 3) You will be awake for the surgery with only anesthetic for the eyeball. I accepted the Atavan with reaching hands as I was terrified I would have a seizure when I saw the scalpel inter my eye. This proved useful, as you DO see the tools coming towards your eye, feel them slightly and smell the burning.

Surgery only takes about 15 minutes. They cut out Fred, and then cut out a similar sized graft from the back of your eye that normally is covered by your eyelid. This graft then gets glued to the area that Fred existed in.

I was fortunate and didn’t feel much pain afterward and slept like a baby until the next day when the patch was removed and my eye could be exposed again.

The eye went through a few stages of recovery. Obviously red and nasty looking, which increased in its red and nastiness for about two weeks before it started to look better. Vision in that eye was still blurry after 2 weeks, and gave me a bit of a vertigo feeling.

At one point I was worried that the graft had moved towards my inner eye, but the surgeon reassured me that it was only the overlap of where the graft gets “tucked in” to the existing eye skin.

I also notice my eyelid was quite swollen and was told that the prescription drops to prevent infection can give you a “droopy” eye. All good things to know as I inspected and analyzed my decision daily!

Today it has been 5 weeks since the surgery, and my eye is looking much much better. It still has a bump where the graft was tucked in, and there is still some redness but overall, it is feeling leaps and bounds from where it was.

So for those of you that spend a great deal of time outside exposed to the elements of the wind and sun…I strongly encourage you to wear sunglasses all the time. Make sure they are good ones, and with lots of coverage. I am very pleased so far with the outcome of my surgery. My eye is so much less irritated then it was with the Pterygium. It wasn’t a fun process but personally I feel I made the right choice. One blinks a lot in a day, and everytime I do, I’m reminded that the blackfly feeling is gone. Thanks to Dr Bhamra in Calgary for his professional work!